On July 3, a Forum of Analytical Centers of the Member States of the Organization of Turkic States was held in Azerbaijan’s Shusha city, which was organized within the framework of the OTS and brought together representatives of the leading think tanks of the member countries and observers of the Organization, reports “Dunyo” IA correspondent. 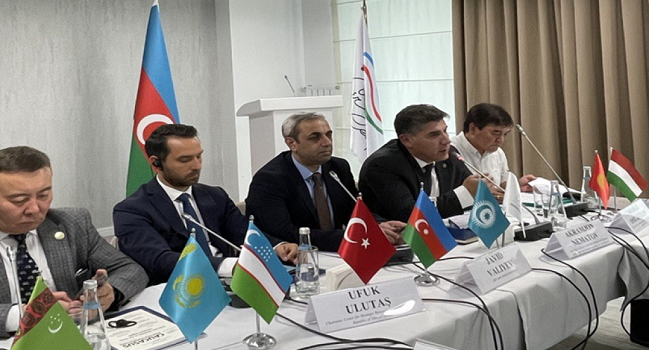 First Deputy Director of the Institute for Strategic and Regional Studies under the President of the Republic of Uzbekistan Akramjon Nematov made a report at the session “Prospects of the interregional platform Central Asia – South Caucasus”.

ISRS representative stressed that the event is very timely from the point of view of the deep transformation of the world order, the growing crisis phenomena in the system of international relations and the global economy.

In the current conditions, according to the expert, it is important to work together to strengthen ties between the states of the Turkic world, to ensure stability and sustainable development in the macro-region.

“It is symbolic that today the representatives of the Turkic countries gathered to discuss the prospects of cooperation of the OTS right here in Shusha – the cultural capital of Azerbaijan, the oldest city of the Turkic civilization, which, thanks to the incredible efforts of the Azerbaijani leadership, is undergoing a revival”, Akramjon Nematov stressed.

At the same time, according to the ISRS Deputy Director, the comprehensive development of Turkic cooperation within the framework of the Organization of Turkic-Speaking States is undoubtedly favored by the current high level of bilateral relations. The recent historic visit of Azerbaijan’s President Ilham Aliyev to Uzbekistan, which took place in an atmosphere of friendship and mutual understanding became a striking example of this.

In the opinion of Akramjon Nematov, the key document adopted following this visit became the Declaration on Deepening Strategic Partnership and Building up Comprehensive Cooperation. This became a landmark event that determined the main vector of further development of bilateral relations, which also provides for strengthening coordination of interaction at the OTS site.

In his opinion, the main role in the development of relations belongs to the development of new forms of economic cooperation. In this regard, it is no coincidence that during the talks, Uzbekistan and Azerbaijan Presidents focused on the establishment of interregional cooperation, the organization of industrial cooperation. This will undoubtedly be facilitated by Uzbekistan – Azerbaijan Investment Fund for financing joint economic projects, the creation of which was agreed upon by Shavkat Mirziyoyev and Ilham Aliyev.

The parties also expressed readiness for comprehensive cooperation on the issue of the restoration of Karabakh. These efforts will become an important contribution to the common cause of the development of the integration of the countries of the Turkic world, and Uzbekistan is ready to take an active part in this. Moreover, there is a significant reserve and potential for this. “We have enough advantages for this, including the strategic partnership being built by Tashkent with all the states of the Turkic world”, Akramjon Nematov summed up.