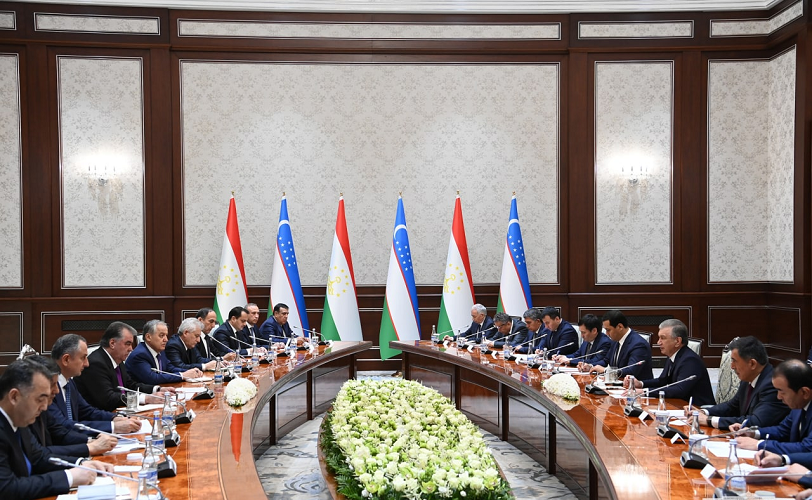 According to the press service of the Head of our state, the President of Uzbekistan noted with great satisfaction the huge progress in all areas of multifaceted cooperation, emphasizing that Tajikistan is a close neighbor, a true friend and a time-tested reliable strategic partner.

President Shavkat Mirziyoyev expressed readiness to further strengthen mutually beneficial and comprehensive cooperation in the interests of the two countries and peoples.

The successful results of the meeting of the Intergovernmental Commission and the business forum held on the eve of the visit, during which agreements and contracts worth $1 billion were signed, were noted with satisfaction.

Effective contacts have been established between the capitals of the two states – Tashkent and Dushanbe, Surkhandarya and Khatlon, as well as Tashkent, Fergana, Samarkand and Sughd regions. During the current visit, the action plan of cooperation will also be adopted by Jizzakh and Sughd regions.

The Presidents reaffirmed the priority of economic partnership between the fraternal countries and noted the significant potential for a multiple increase in the volume and range of trade.

The heads of state noted the existence of great prospects in the implementation of projects in mechanical and electrical engineering, textile, leather, pharmaceutical, food, agro-industrial, mining, metallurgical and other industries.

The implementation of projects of interregional and industrial cooperation with the active use of the potential of Uzbekistan – Tajikistan Investment Company was emphasized.

Agreements were reached on strengthening cultural and humanitarian cooperation. The Presidents noted the need for paying attention to interaction in science, education, art, cinema and tourism. A special priority is the development of the intellectual potential and the spiritual world of young people.

An important factor in achieving the goals set will be the historic decision of the two leaders to strengthen eternal friendship and establish an alliance between the two countries.

It was noted that the visit of the President of Tajikistan, which is taking place in the year of the establishment of the 30th anniversary of diplomatic relations, is a clear confirmation of the strength of the centuries-old friendship and good neighborliness between fraternal peoples of the two countries.